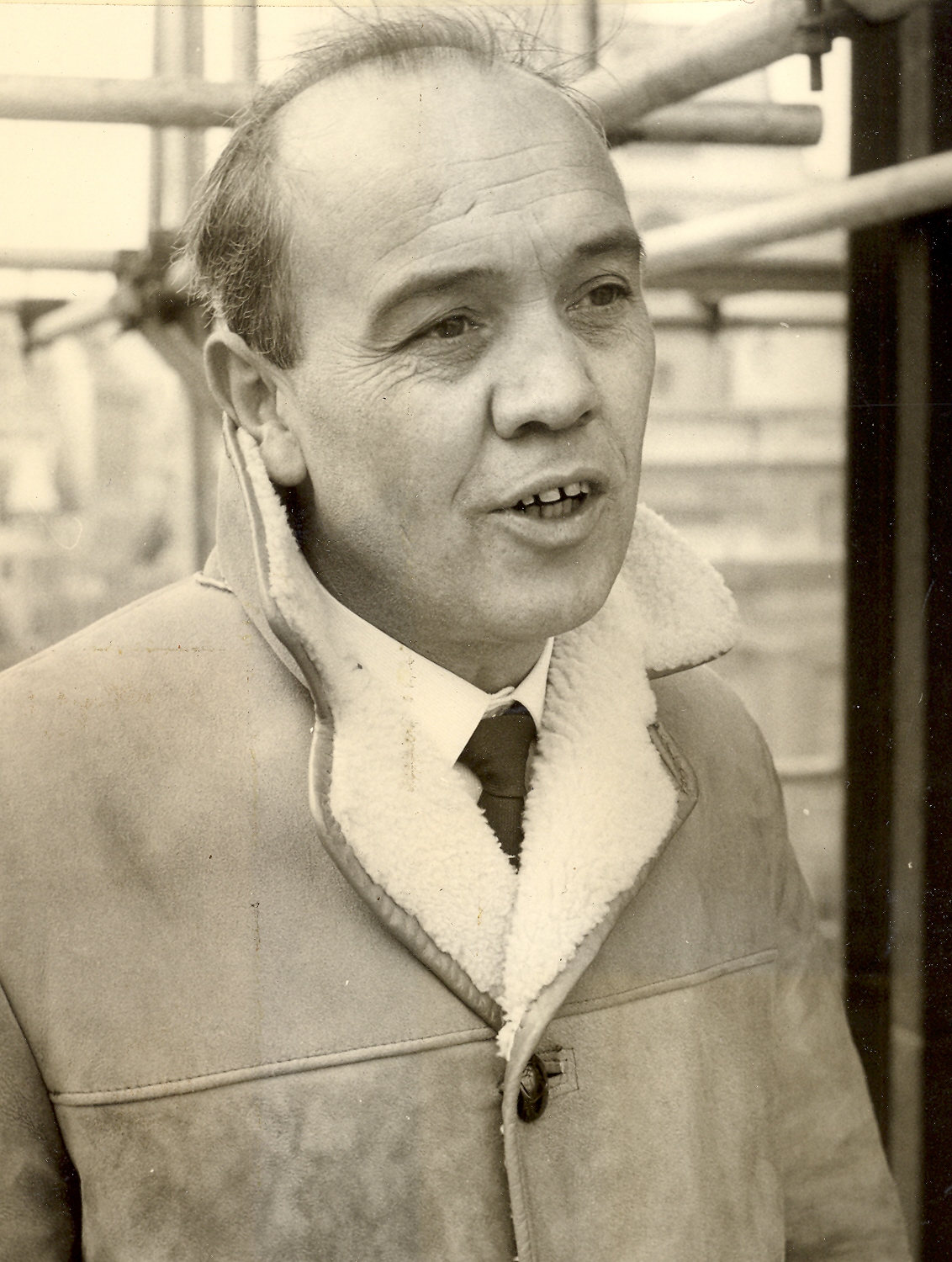 In 1950, after serving the country in the Royal Navy, Patrick Hanifan (Pat) was juggling a job in the fruit and vegetable business with afternoon work helping his elder brother, Maurice, in the scaffolding industry.

The Second World War had left extensive damage throughout London and the rest of England; the building industry was booming as buildings required reparation, many had to be completely rebuilt from scratch. Scaffolds were required to aid reconstruction of the ruined buildings.

The time was ripe to establish a new scaffolding company, and Maurice was approached by Sydney Salter and Cormac Hargreaves to start afresh; however, as he was otherwise employed, he suggested Pat take up the partnership. With the help of the five other Hanifan brothers, Pat scraped together the funds to purchase a second-hand lorry and the materials necessary to begin work. The company began small; he rented a local bombed out Catholic churchyard on Monck Street in Westminster, and Coventry Scaffolding was incorporated.

Soon, the company began to grow, and moved to a new location in Regency Street, making many new contacts in the Westminster area. In time the staff also grew, including a few more Hanifan brothers, and Maurice Hanifan’s son John, a future Managing Director; as well as some of Coventry’s longest serving staff, Charlie, Benny, Kenny, Alfie and Jack, who all remained at the company until their retirement dates.

As the decade drew to a close, Coventry undertook it’s first major scaffolding job at the DeHaviland Factory in Leavesden. The Ministry of Technology also approached Coventry to test power cradles in Scotland, prompting Coventry’s subsequent involvement in cradle work and the eventual establishment of a Power Access Division. 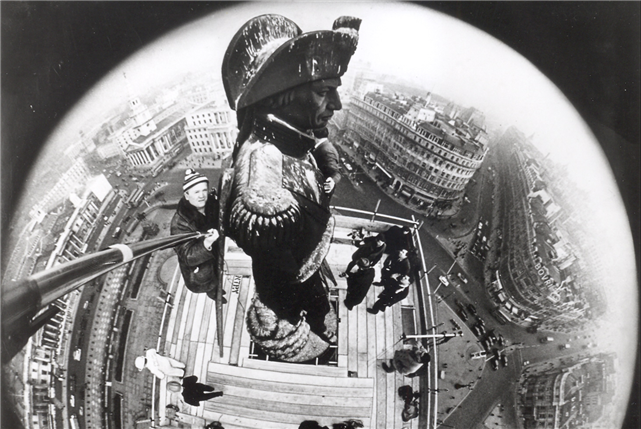 Coventry continued to grow in size and reputation throughout the 1960s, although Cormac Hargreaves, a founding member, left to pursue other ventures. Coventry participated in a ground-breaking project ‘Operation Winter Working’ at the Ministry of Public Buildings and Works in Whitehall. During the project, scaffold towers were wrapped in plastic sheeting, a first in the industry, and heaters installed at the bottom to raise the temperature to allow painters and decorators to continue working.

Coventry also landed a second major project, a scaffolding contract for Nelson’s Column, marking the first time the monument had been fully scaffolded and cleaned since it was built in 1844. The refurbishment garnered a great deal of press attention and Coventry Scaffolding was the name on everyone’s lips; Coventry received a commendation from the Ministry of Public Building and Works as a result.

During the sixties, Coventry outgrew its rented depot in Westminster, and in 1968 the company moved to Crystal Palace Road in East Dulwich; where it remained for the next 25 years.

Finishing the decade in style, in 1969 Coventry provided stands for the UK visit of Richard Nixon, President of the United States.

Coventry’s larger premises allowed for additional storage and lorries, so despite Sydney Salter’s retirement, the company continued to grow, and many larger scaffold contracts were won. Pat’s son, Paul joined the company in 1972, continuing the family business. Sadly Pat’s brother, Billy Hanifan passed away in 1975, aged 52.

The 1970s was a time of great political unrest; terrorist bombings caused a lot of damage to the buildings of London. Coventry proved to be adept at quickly providing scaffolding to keep structures safe during this period, prompting the company to be referred to as ‘the 24 Hour emergency scaffolders’.

On the 31st October 1971, the Post Office Tower (now the BT Tower) was damaged in an alleged IRA bomb plot; debris from the explosion was hazardous and the fire service struggled to reach the structure. Within hours, Pat Hanifan and his team of scaffolders arrived on the scene to construct a rig to allow access. However, the firemen refused to enter the building, so Coventry cradle-hand Benny Watts stepped up and removed the twisted metal debris himself; he received the BEM for bravery as a result.

On 26th January 1972, scaffolding from a rival company was damaged during a storm at the Quadrangle at Buckingham Palace; Coventry arrived and secured the scaffolding within one hour. Similarly, when a bomb hit Westminster Hall at the Houses of Parliament, Coventry lorries entered New Palace Yard to help whilst the fire still blazed.

In July 1974, an IRA bomb ripped through the Armoury of the Tower of London while Coventry Scaffolding worked at the site; they were able to act immediately and were instrumental in getting wounded people out of the building to safety. And when the Government Department at Horseferry House was bombed, Coventry prevented further damage to the building by providing propping equipment.

Alongside these emergency services, the 70s also provided lots of exciting large-scale projects for Coventry, such as building electric cradles to allow the filming of the external façade of Big Ben and the Houses of Parliament; providing scaffolding for No.10 Downing Street; and 1-19 Victoria Street as well as a birdcage at The Natural History Museum.

Many of the original employees reached retirement age during the 1980s, and a whole new generation of employees joined the company. Whilst Maurice Hanifan retired, Paul and his uncle John Hanifan joined the Board of Directors.

Many large scaffold contracts were acquired across the 80s. Coventry provided scaffolding for the SLV3 Indian Rocket exhibit at The Science Museum, the Queen Victoria Memorial, the Albert Memorial, Admiralty Arch, the King Edward Building and the House of Lords lobby.

Coventry Scaffolding grew in reputation, cementing itself as a leading name in the London scaffolding scene.

1990 heralded further change at Coventry Scaffolding; the company moved to a new purpose-built depot in Sydenham. Previously owned by SGB, the new larger depot provided plenty of room for materials and good access, and Coventry welcomed a number of previous SGB employees to the team.

Coventry undertook many exciting projects throughout the 90s, including Shell Mex House, the Department of Trade and Industry, the complete external façade of Harrods, Unilever House, Horseguards Parade and the British Museum. Coventry was also awarded a contract of the highest order, to scaffold the front façade of Buckingham Palace.

In 1991 Coventry won a contract with the Department of Environment in Marsham Street. Scaffolding erected to prevent concrete from falling from the three buildings was expected to last four years, but lasted into the new millennium, until the building was demolished in 2002.

There was call for Coventry to spring to action with its 24/7 Emergency Service once again following further bomb damage across London. Three notable projects include the Baltic Exchange, the emergency birdcage inside the House of Commons following the collapse of an oak ceiling beam, and a birdcage after a similar incident in the Ballroom at Buckingham Palace.

Pat and John Hanifan retired during the decade, and current MD, Perry Hanifan joined the company.

In 2005, Coventry Scaffolding received a significant honour; the company became the first scaffolding company in the United Kingdom to be granted Her Majesty Queen Elizabeth’s Royal Warrant.

Coventry Scaffolding is one of the oldest independent scaffold companies in England, and will continue to offer it's first class service for many years to come.

Coventry Scaffolding looks back at The Post Office Tower bombing as we approach th...

Choosing the right scaffolding contractor for your construction project is crucial...

What makes us different

Coventry Scaffolding is no ordinary scaffolding company. We offer the top scaffolds, with the best health and safety, at an affordable price - delivering your scaffolding project on time, on budget and to the highest standards.