At Coventry Scaffolding, we offer an unparalleled, 24/7 emergency service and have been involved in providing access and support in the wake of a number of high-profile events. Back in the 1970s we erected many emergency scaffolds during a particularly turbulent time of political unrest caused by a number of IRA attacks on London. One of the most significant of these was the bombing of the Post Office Tower -  now the BT Tower – in 1971. As we approach the 50-year anniversary of this historic day, we look back on what happened and our involvement. 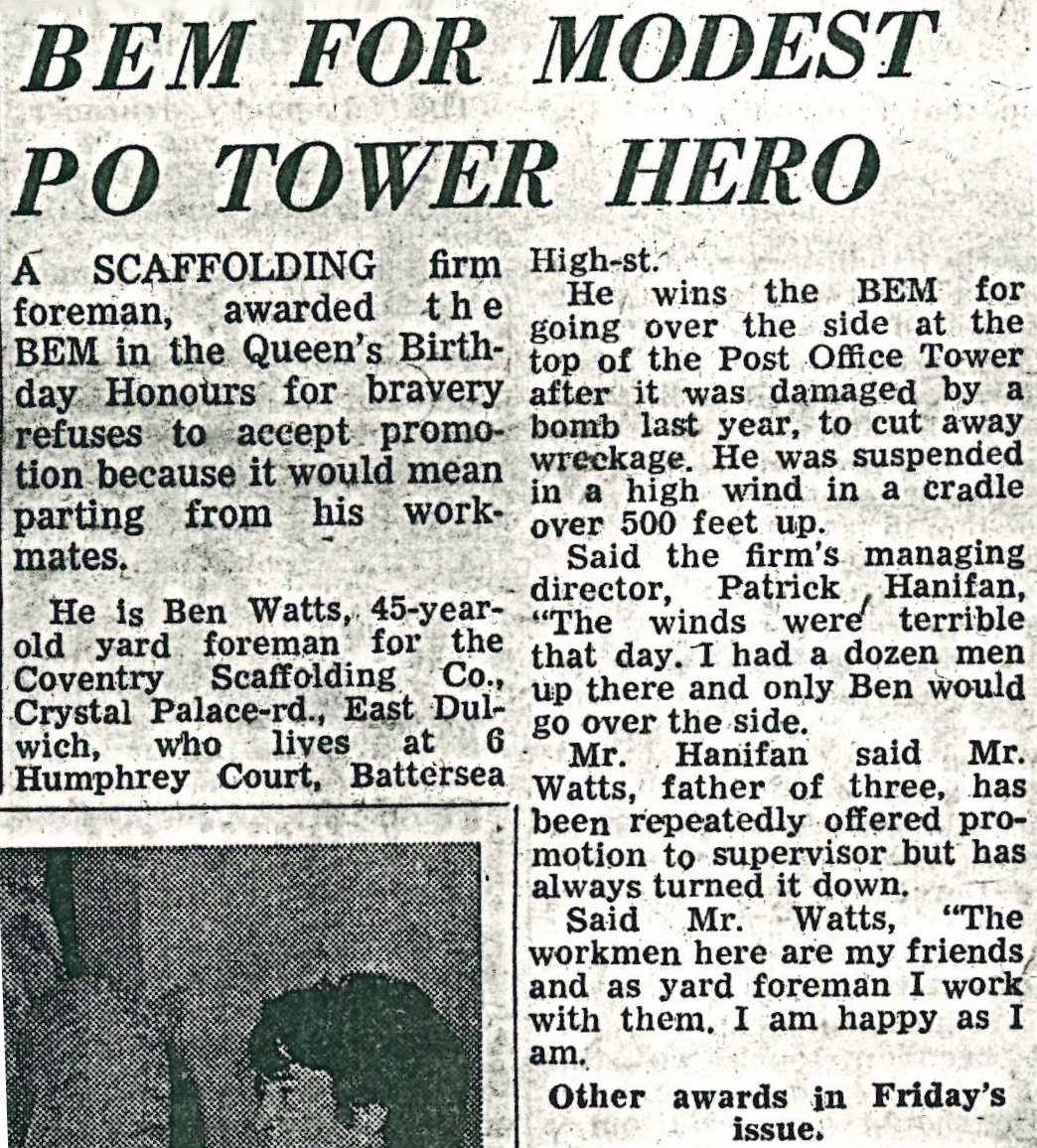 On the 31st October 1971 at 04:30, a blast occurred on the 33rd floor of the tower, followed by the police receiving a phone call from a man claiming that the “Kilburn Battalion” of the IRA were behind the attack. Despite security sweeps and searches, it’s believed the culprit was able to plant the bomb in a toilet on the lowest of the public viewing galleries. The explosion ripped through foot-thick walls and, while there wasn’t any immediate danger of the tower collapsing, it did leave hazardous debris hanging dangerously over the streets of London below.

With the fire brigade struggling to reach the structure themselves, Coventry Scaffolding founder Pat Hanifan and his team were called in to help. Initially, their task was to construct a rig which would grant access, but when the fire brigade refused to enter the cradle rig, the team had to take matters into their own hands, with one member taking a lead role. On something of a solo mission, Coventry cradle-hand Benny Watts successfully removed the twisted metal himself and received the British Empire Medal for his bravery as a result.

For over five hours, Benny worked tirelessly in the freezing cold weather to hack away at the twisted metal hanging perilously over the pavement 500ft below, using only a hacksaw borrowed from the attending Firemen.  At times during the windy conditions, the cradle would be 10ft off the building and even Benny considered what on earth he was doing there during a rest period.  Piece by piece, he brought the most dangerous fragments back inside the building, preventing a possible catastrophe below. 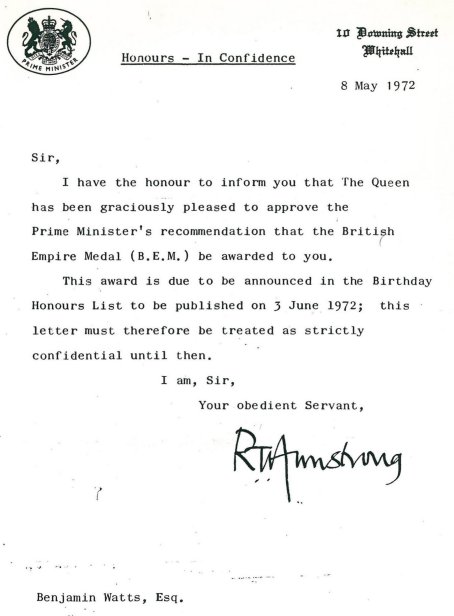 Unfortunately, during the course of his work, Benny’s watch caught on one of the pieces of metal and came off his wrist.  A recent birthday present from his wife, he thought it was gone forever, but the next day, it was found on the ground, back cover missing but otherwise remarkably intact.  When watchmakers Timex heard of the story, they invited him and his wife Gwen along to their factory to choose any watch he wanted from their collection as a replacement.  Typical of the man, Benny chose the exact same watch his wife had given him.

Several months later, Benny received a letter out of the blue from the Prime Minister’s Private Secretary Lord Armstrong.  It read, “I have the honour to inform you that The Queen has been graciously pleased to approve the Prime Minister’s recommendation that the British Empire Medal (B.E.M.) be awarded to you.  This award is due to be announced in the Birthday Honours list to be published on 3rd June 1972.”

The BEM is awarded in recognition of a ‘hands-on’ service to the local community. This is often a long-term charitable or voluntary service, or a shorter contribution of three to four years which has made a significant difference. To be awarded this for a single act of bravery further highlights the extreme danger Benny put himself in to ensure the safety of others.

Our work on The Post Office Tower is just one job in the very long and prestigious history of Coventry Scaffolding. From the early days in the 1950s through to present day, find out how the company has grown and expanded into the successful business it is today here. You can also stay up to date with all our latest news by following our social media. We’re on Facebook, Twitter, LinkedIn and Instagram. 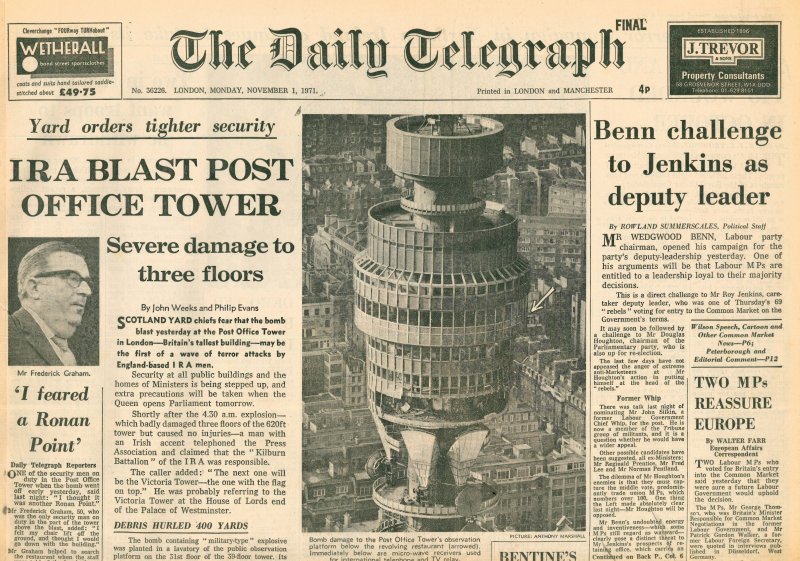 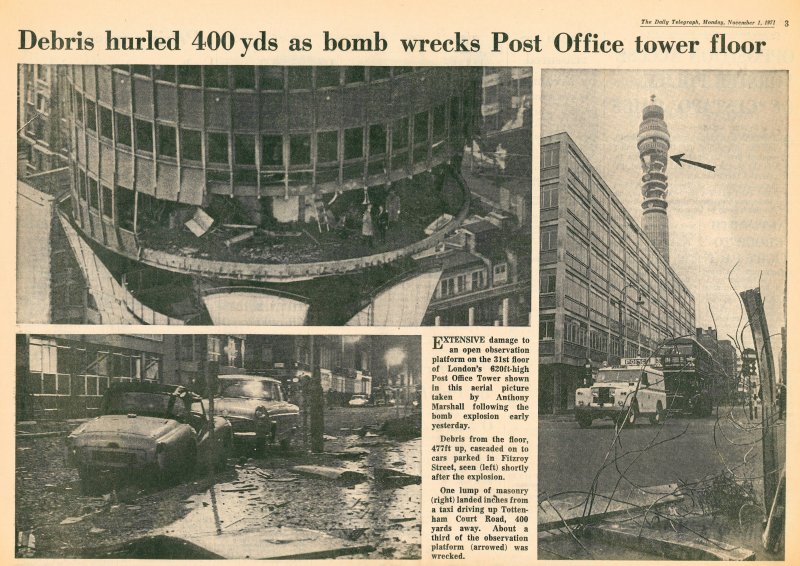