We are thrilled to announce that Coventry Scaffolding has scooped top prize for 'Project of the Year', for businesses up to £5m turnover at the NASC Awards 2018. The win was for 'The London Mastaba' project, which transformed the London Skyline this summer with a stand-out floating art masterpiece on Hyde Park's Serpentine Lake. The result was revealed on Friday 23 November at a lavish ball at the Sheraton Grand Hotel & Spa in Edinburgh.

Our winning entry included our exciting time-lapse video which you can view on Facebook and Twitter. Up against tough competition, our team is thrilled to have come out on top.

Suited and booted for the big night our chairman Paul Hanifan, director and brother Perry, managing director Paul White, and senior supervisor Barry Jones, attended the prestigious ceremony. The celebrations were preceded by an AGM, addressed by presenter and former gymnast Gabby Logan, who also went on to host the awards. Entertainment at the ball was provided by comedian Debra Stevenson, with music by Escala, helping  make the night truly memorable. 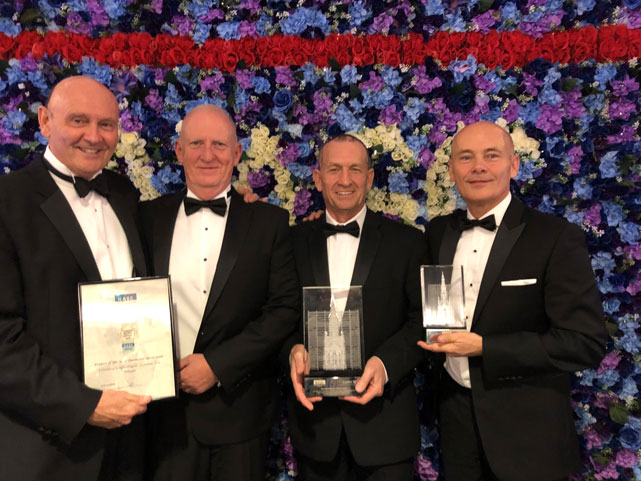 "We were delighted when the results were announced. Winning the NASC Project of the Year is an accolade we’re all incredibly proud of," enthused White. "The efforts of the team in creating the Mastaba as well as the work that went into our entry, makes this award extra special. I'd like to personally thank everyone involved, including NASC who put on a very enjoyable night. We all had a fantastic time."

To find out more about The London Mastaba and our other projects click here.

You can also keep up to date on our latest news by following us on Twitter and Instagram.

We're delighted to be celebrating our 70th anniversary this month! Take a look bac...

Our MD Perry looks back at one of our most iconic projects - providing scaffolding...