Over our 70-year heritage we’ve had the privilege of working on some of London’s best-known landmarks and buildings. One of the most notable jobs was in the very heart of London and took place over 60 years ago, when Admiral Horatio Nelson and the column on which he proudly stands, was treated to its first full clean since his initial elevation in 1844. 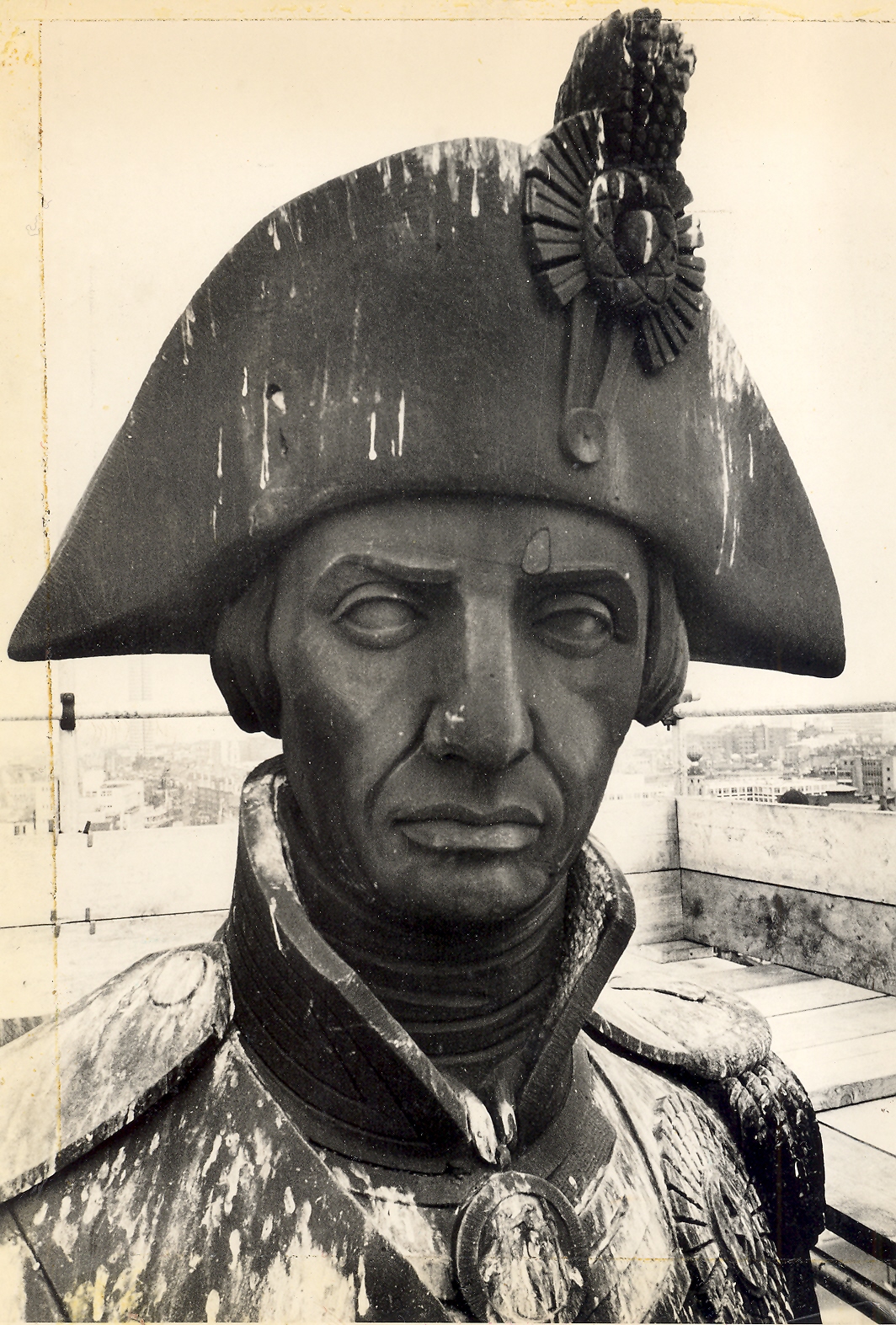 Initially erected to honour one of Britain’s greatest naval heroes, who lost his life at the Battle of Trafalgar just forty or so years earlier in 1805, the monument was originally meant to be 33ft higher than the 170ft it stands at today, but fears over its stability led to the column being reduced in size.  Building work commenced in 1840 and took four years to complete.  The column masonry is formed of huge blocks of granite from the Foggintor quarries on Dartmoor, which weigh nearly 2500 metric tons.  They would have been placed there without the use of mechanical hoists, relying instead on man and horsepower.

Coventry Scaffolding provided the access scaffolding for the 169ft 5in (51.63 m) monument way back in February 1968, which enabled stonemasons London Stone Limited, to blast the stonework with sand and air and give the monument a nice clean look, freeing Nelson himself from all the pigeon droppings accumulated over the years.  It was quite a task and earned a huge amount of press attention.

The 18ft statue of Nelson carved from Craigleith sandstone had been cleaned before, most recently by steeplejacks in 1963, but this was the first time that Nelson, his column and the four lions guarding him had been given the full treatment.

More importantly, it allowed some essential stone restoration to be carried out on the historic monument, which had been damaged during the London Blitz just 28 years earlier.  Ironically, some of the worst damage was allegedly inflicted by our own anti-aircraft guns rather than German bombers.  In pictures, a large piece of stone can be seen loose and then missing completely from above Horatio’s left eye.  Where it went, only those who worked there know!  Legend has it that Hitler hadn’t intended to bomb Nelson’s Column, following success of his ‘Operation Sea Lion’, he intended to dismantle the whole thing and have it taken to Berlin as a trophy. 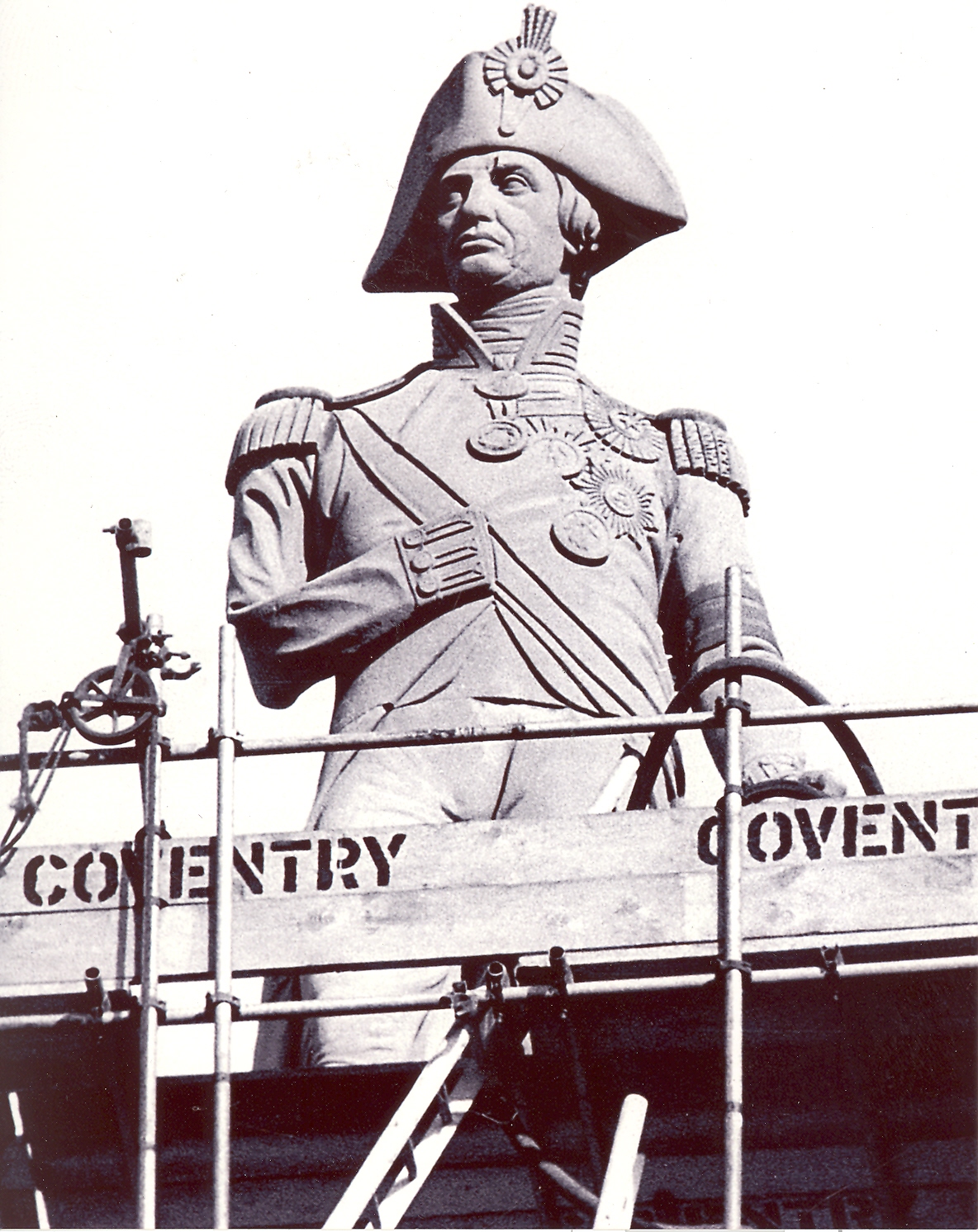 For my company, work commenced early in January 1968.  Worked on mainly by a three-handed gang, led at the time by Coventry chargehand, Frank Trainer, the job took several weeks to complete.  Dressed in clean white overalls and donning yellow site helmets, they were likened to spacemen by one journalist, but in truth probably needed the extra layer to protect them from the cold.  At 170ft high, the wind chill would have made the air temperature feel several degrees lower than it was at ground level.  Surprisingly, very few pigeons roost at this level for that very same reason.

Once the corrugated site hoarding had been put in place to form the site compound and storage area, work commenced in earnest.  Firstly, the scaffold obviously had to be independent.  The base of the scaffold, incorporating double standards, was relatively straight forward with support from the stone plinths forming a nice wide base. Once above the pedestal and at the start of the shaft, the scaffold became trickier as the structure turned from square to circular and somewhat narrower.  It also tapered in from a circumference of 33ft at the base to 28½ft at the top. 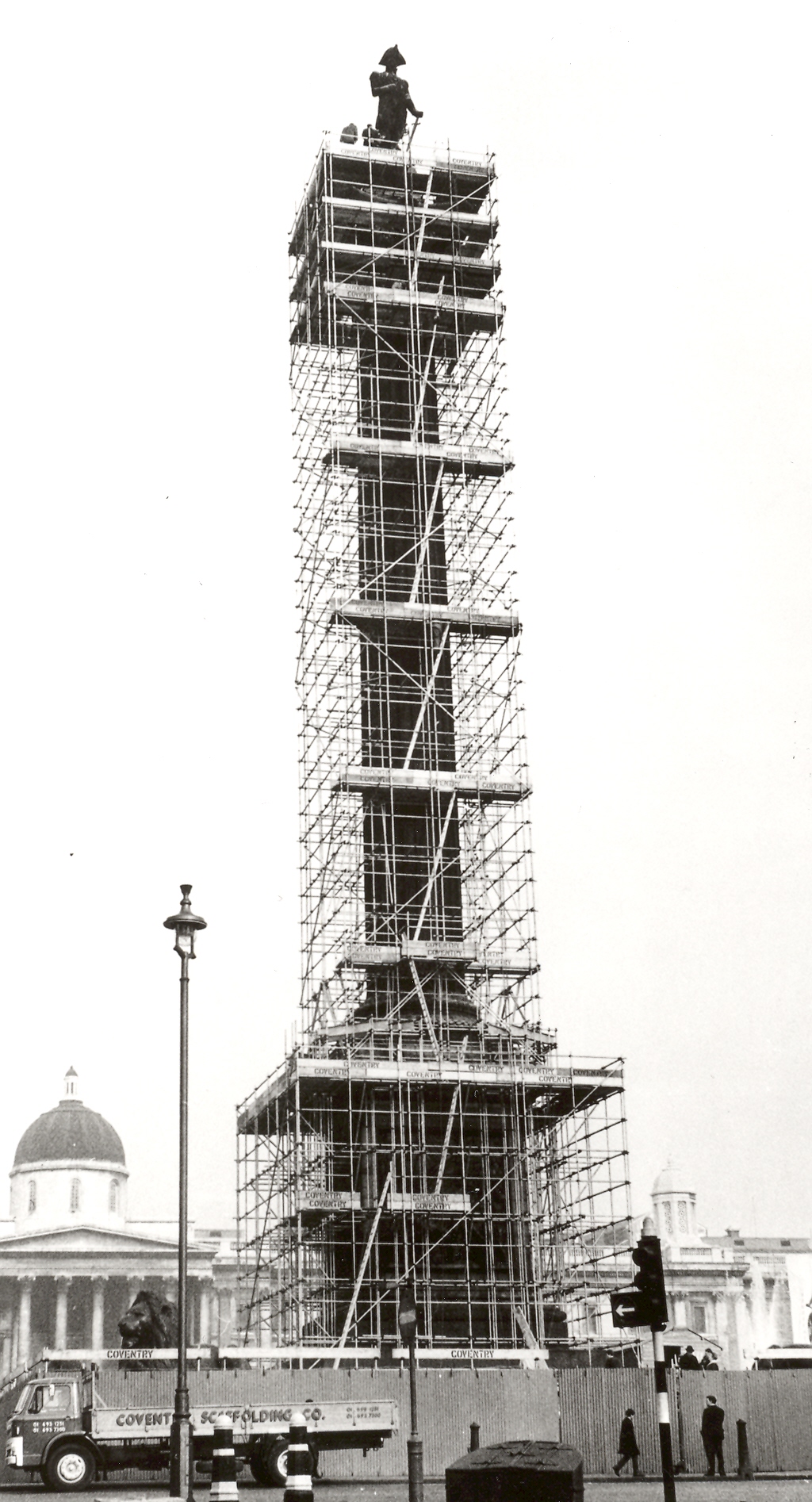 Each corner had to be supported off twin steel girders and, about 15 years later, I remember sitting in a building technology class in college when the lecturer put up some scaffolding pictures on the screen.  The first one showed what looked like lots of tubes all connected by what looked like dozens of double coupler fittings.  It looked familiar and when he showed wider shots, my attention was immediately raised.  They were pictures of the scaffolding at the bottom of the Nelson’s Column shaft.  The Lecturer didn’t know my connection but concluded that scaffolders couldn’t produce work like this anymore.  I don’t completely subscribe to that sentiment but took it as compliment to Coventry Scaffolding’s team of workers.

Work continued up the fluted column, lift by lift, until the capital was reached.  It seems odd now, but until the scaffold got to within 30ft of the capital, it wasn’t fully boarded and therefore, the scaffolder took the boarded lift he was working on up with him.  Back in the 50s and 60s, training was pretty non-existent, but these scaffolders were highly experienced men in this pre-SG4 world!

At this height, with the noise of the London traffic and communication with the labourer below difficult, planning and teamwork was more important than ever.  It was imperative not to forget any tools and remember to use the toilet facilities before climbing up. 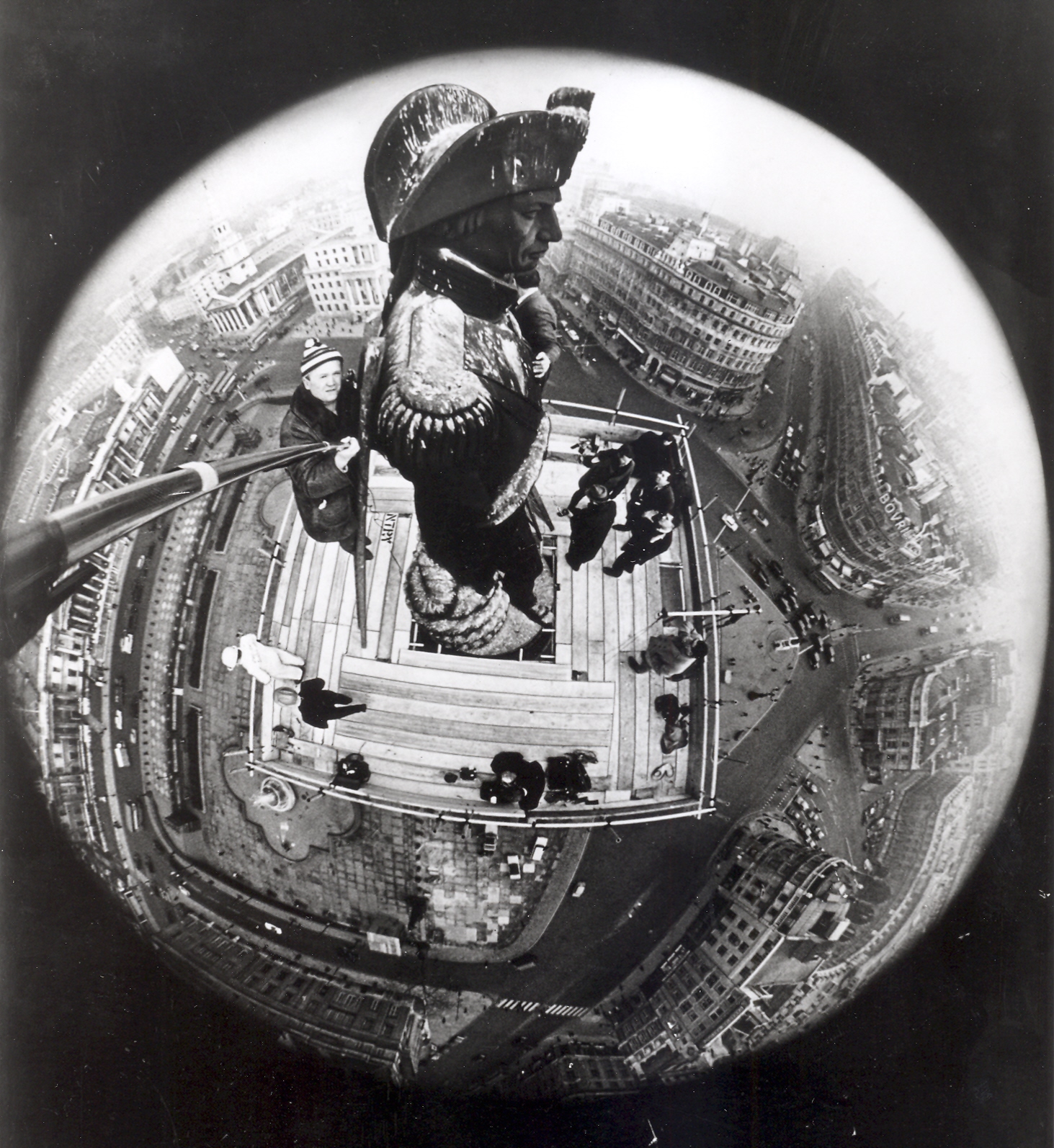 Now at the base of Nelson’s feet, with the ladder stages installed, they had a little time to finally enjoy the view.  It's not every day you have the opportunity to get face-to-face with a national icon, so the press were out in full force.  Pat Hanifan did a radio interview from the top after persuading a nervous interviewer to accompany him and being told not to advertise or mention ‘Coventry Scaffolding’.  Of course, it was the first thing he did!  I remember being taken to the job by Mum as a six-year old with brother Paul and sister Pauline.  A cine film taken at the time, captures us playing about on the scaffold at the base and Paul gingerly coming down a ladder from the lift at the top of the pedestal.

The story of Nelson’s cleaning received interest from around the world with every major daily newspaper sending their photographers up to the top to get a once in a lifetime view of London.  The Daily Mail ran the story alongside an iconic photo taken from the top of the column using a fish-eye lens and what could be considered one of the earliest ‘selfie sticks’.  Officially, we were not allowed to advertise but Pat had all the toe-boards stenciled with the name ‘Coventry’ leaving no-one in any doubt who had carried out the scaffolding. 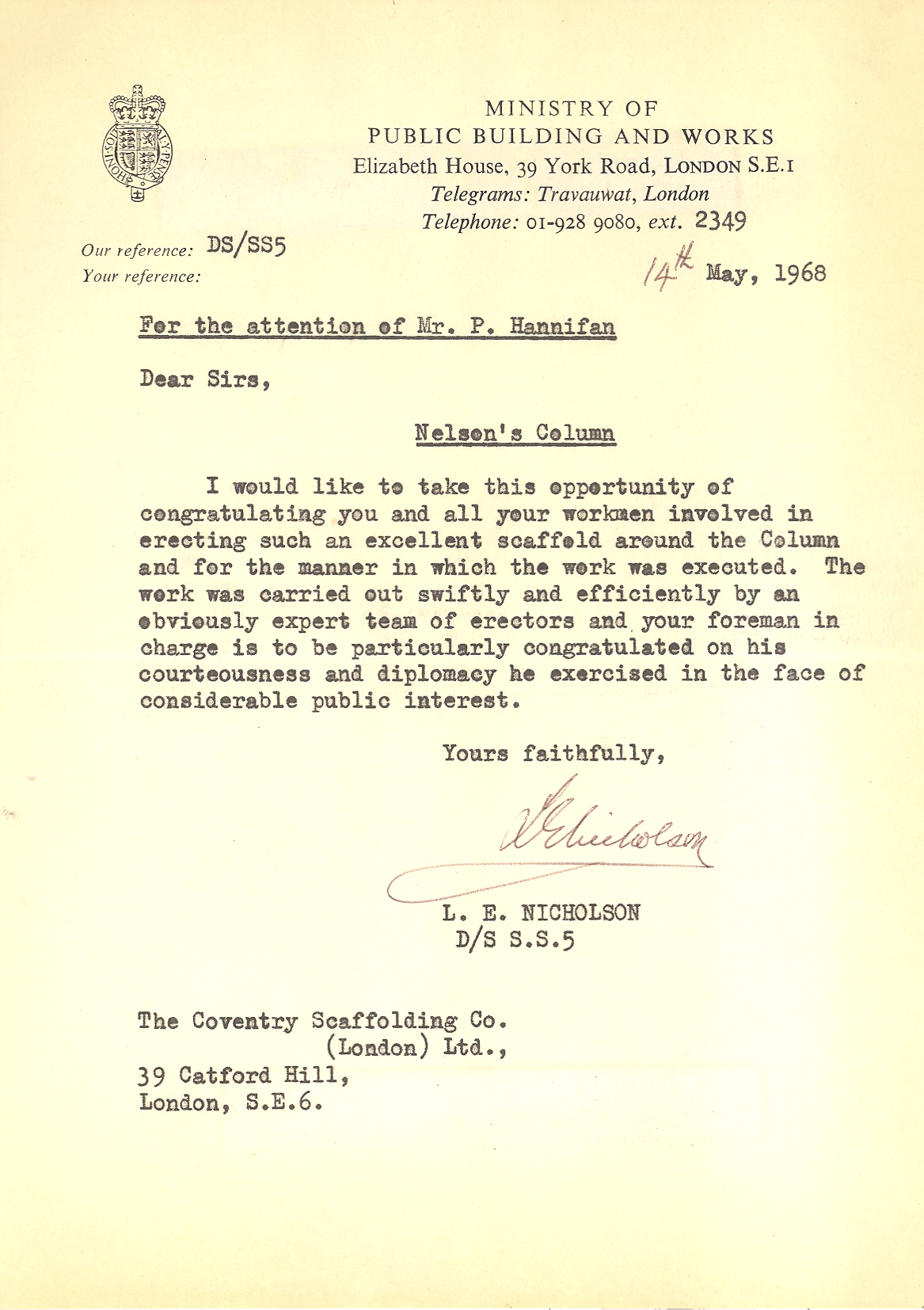 Many people were surprised Nelson didn’t have a patch over his eye, but this was explained by a historian of the time.  Although Nelson was partially blind in his right eye, he often wore a patch over his perfectly normal left eye to keep out the glare of the sun.

The contract went fantastically well and a few weeks after the works were complete, we received a letter from the Ministry of Public Works and Building, praising us for our work.

The letter from Mr. L.E. Nicholson read “I would like to take this opportunity of congratulating you and all your workmen involved in erecting such an excellent scaffold around the Column and for the manner in which the work was executed.  The work was carried out swiftly and efficiently by an obviously expert team of erectors and your foreman in charge is to be particularly congratulated on his courteousness and diplomacy he exercised is the face of considerable public interest”.

The conclusion to this story is that following the success of the project and the iconic nature of the structure, we applied for permission to use Nelson’s Column surrounded by scaffolding as our logo.  A silhouette of Nelson, his column and his Lions was agreed upon with a red ‘Coventry’ emblazoned halfway up the structure. This logo was used until early 2000 when a more modern logo was adopted. 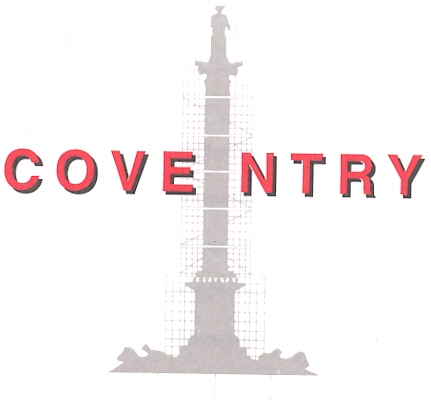